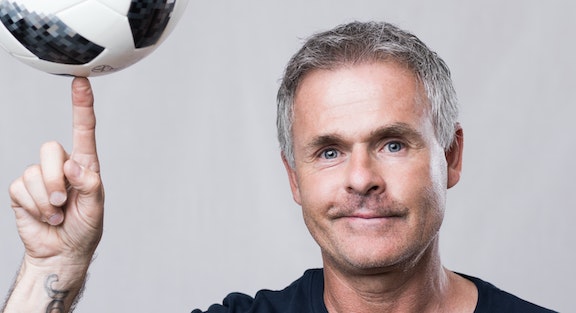 Anders Limpar on Everton, Arsenal, and Shaving his Body!

Bookies Bonuses caught up with the former Sweden international who discussed his old clubs and responded to a claim made by Perry Groves on talkSPORT.

Perry Groves recently told a story about you shaving your whole body to go faster through the air. Is it true, and what do you have to say about that?

I played with Perry Groves for four years and he's a fantastic player and person. It’s a funny story he tells, even though it was only the legs I shaved. But it is true that it was to become faster on the pitch.

You try all the tricks you can, of course, and I can’t remember losing a single running duel after that. However, it was costly, as I missed the next game due to rashes after the shaving.

You left Italy for England pretty quickly. Was it an easy decision?

No, it really was not. I liked it in Italy and Cremonese, but we were relegated from Serie A in 1989-90 and I felt I was too good for Serie B.

I had offers from both Genoa and Sampdoria, and all the big names were playing in Serie A at that time. But then Arsenal contacted me and I went with that instead.

I wouldn’t call it a wrong choice, but I regret it a bit that I didn’t stay a couple of more years in Italy and tried with Sampdoria which was a top team with [Gianluca] Vialli and [Roberto] Mancini, amongst others.

Maybe I was too quick when Arsenal reached out but, in the end, that worked out as well.

Where do you think Everton have gone wrong recently?

We’ve got really big problems at Everton. I saw them live against Liverpool and I see things that can be improved. I think Frank Lampard is the right coach for this team but I question some of the players and their mentality.

It’s special to play in northern England. We see this with the passion that exists in clubs such as Newcastle, Sunderland, Liverpool, Man United, and so on. To play at Everton takes a lot of character in the sense of what it means to fight for the team and for the fans.

You keep fighting even when things go against you, and right now some players have it and others don’t.

What do they need to focus on to turn things around?

I believe we can make it. It comes down to the players fighting for the badge on their chest, for each other, and for the fans. Then we will win two or three of the last games and survive.

It’s a key season as we’ll soon have a new stadium ready, an expensive squad, and huge support from the fans. For that to work out, we need to play in the Premier League - there’s nothing else. They have to shave their legs and go out and fight!

What positions do Arsenal need to strengthen in the summer?

[Alexandre] Lacazette is in a bit of a storm. We released [Pierre-Emerick] Aubameyang and I don’t know if you can trust [Eddie] Nketiah to be this real goal scorer.

We need a really good striker again. Someone who can score 20-30 goals in a season, like Olivier Giroud, who is an obvious choice and the first name the coach writes down for the starting 11.

I also believe we’re missing a hard worker. A Patrick Vieira type, who is a hard-working two-way player and can lift the team in tough games.

That will allow [Emile] Smith-Rowe, [Bukayo] Saka, and [Martin] Ödegaard to do what they are really capable of with their offensive qualities.

How close are Arsenal to being serious title contenders?

If Arsenal manage to qualify for Champions League this season and then fix the positions I just mentioned, I think we can challenge Man City and Liverpool in a couple of seasons already. This squad, including [Mikel] Arteta, is still young so they will only become better and better.

Is Arteta the right man to take Arsenal to the next level?

After the bad start that Arteta had, I think he’s done incredibly well. With hard work and a great game idea, he has managed to turn things around. It indicates that he is a really skilled coach to be able to turn Arsenal around in that way.

To stand up for and believe in your own ideas even when the winds blow, and then become the manager of the month the next month, is a sign that he is the right man in the right place. Today you can see exactly how he wants to play, and when they do, I think Arsenal are a really good team.