In October 2021, TOTO - the iGaming arm of Nederlandse Loterij - became one of the first online betting brands to open its doors to Dutch players having been granted a license by KSA. The state-owned company has been associated with betting in the Netherlands for decades, and their current offering is now better than ever before. A wide range of sports betting events are available pre-match and in-play, and users can play casino games as well. 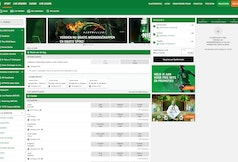 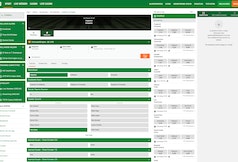 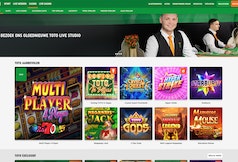 TOTO is a Dutch bookmaker that goes back more than 60 years. That's right - the KNVB laid down the foundations of the TOTO football pools long before Johan Cruyff delighted us all with his signature turn.

And now, six decades and many funny commercials later, we have a TOTO platform that was on the small list of licensed gambling companies allowed to operate legally in the Netherlands as of October 1st, 2021.

Of those 10 lucky operators, TOTO was one that had already gained the trust of Dutch bettors thanks to its long history in the industry and the brand awareness sponsorship campaigns from years gone by.

Football is the site's biggest priority, but they offer 20+ sports in total as well as a casino and live casino.

The football section is actually good enough to compete with that of some of the top international betting sites.

Well, for top fixtures in the Eredivisie, Premier League, and other top competitions, you're looking at 200+ available bets per game, as well as a bet builder option that has a wide range of possible selections broken up into various categories. 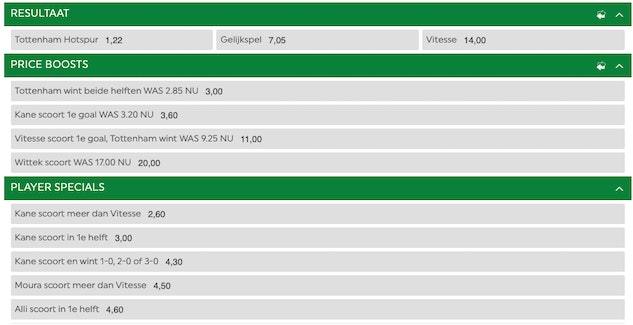 TOTO presents more boosts and markets than most other betting sites.

What about other sports?

There is quite a large dropoff from football to the other sports in terms of the depth of markets offered - but we'll let TOTO off because football has clearly been their priority ever since the company was founded.

The basketball, hockey, tennis, and darts sections aren't too bad. There's nothing spectacular in there, but the basics are all covered.

With Max Verstappen's rise to prominence in Formula 1, plenty of attention is now being paid to that particular sport with a variety of specials ahead of each race.

Bet while on the move 🏃

One of the best things about TOTO is the functionality that allows you to bet whilst you're out and about.

I'm not saying you should be scrolling through the odds while you're running through the park, but TOTO has an app for iOS and Android which means it's easy to get your wagers in whether you're at the pub, football stadium, or at work while the boss isn't looking.

Equally impressive is the range of customer support options on offer - including live chat, telephone, Facebook and Twitter.

TOTO is fully licensed to operate in the Netherlands and it is very easy to sign up and start playing if you are aged 24 or older.

Now, you can also claim a free bet of up to €50 when you register with TOTO.

How to Claim the TOTO Free Bet

TOTO has a mobile app for both iOS and Android, and by downloading one of them onto your phone, you can gain access to thousands of betting markets every day as well as all of the features you would find on the full-sized desktop site.

The TOTO site has a casino and live casino section - both of which are filled with a wide range of games courtesy of the industry's leading providers.

Popular slot games like Starburst, Book of Dead, and Bonanza are all available, as well as various TOTO-exclusive live titles with live dealers.

Best of all, you can claim the TOTO casino bonus as an alternative to the sports bonus.

How to Claim the TOTO Casino Bonus

If it's purely football betting that you're after, then we could probably score this site a 10/10, but there are one or two drawbacks that mean we have to deduct some points.

The biggest problem was previously the lack of a welcome bonus, but this has now been fixed.

Another issue is the lack of payment methods aside from iDeal, but at least they do have iDeal which is hugely popular and convenient.

We can't speak highly enough of TOTO as far as safety, security, and trust are concerned. If you like football betting and perhaps the occasional flutter on a few other sports, you can't go wrong here.

TOTO is a safe pair of hands in the Dutch betting space. It would be a great first choice for anybody - unless you don't like football.

You'd be forgiven for thinking it's a football-only betting site when you first arrive at TOTO, especially if you're aware of the brand's history.

But if you do enough digging you'll find that there are actually 20+ sports on tap and it's a terrific overall selection. Also, there's a dedicated TOTO app, which is a massive plus!

Some more customer support options would be nice, but now we're just nitpicking. This is a superb bookmaker ✅